The Schöne Brunnen is the original name of the Beautiful Fountain. At first, it was a modest smaller fountain with the Christian Cross on the top and three lions from which the water spouting from lions. The bottom of the fountain is hexagonal, leaving more than enough space for the next generations to finish this project with more money and will to make it better.

The fountain, in its original shape, was made by the three brothers, known by that they made ‘Church of Our Lady‘, the fountain was made later than that. The first written trace of three lions with water in the small pool around it was in 1459 by the clerk Johannes Müllner, who liked the lions on the fountain.
After he died in 1634, history was re-written, and the second mention of the Beautiful fountain was in Berlin in 1871 and it mentions just two lions on the fountain.
The shape of the Beautiful Fountain which we know it today was made from 1385 to 1396. It started with ideas from Fritz Pfintzing, and red sandstone, but he died in 1389 and the job was finished by Heinrich the Barlier who made it 19 meters tall.
It’s placed on the main square, or the main marketplace, in Nuremberg looking to the north.

Master Rudolf along with two other artists from Nuremberg are hired to paint the new fountain with paint and gold, and just that job cost 4.500 guilders, which was a lot of money for those times. Expensive painting on the fountain, it was always one of the biggest problems of the city of Nuremberg. Weather in Germany was cruel to the fountain, and everything was repainted almost every single year.

Painting over was done in 1420, again in 1447, then in 1464, then in 1490, and the last repainting was done in 1540. The city invested in the fountain every time it needed and then was silently neglected for the next 30 years. At one time, there was the idea of destroying the fountain altogether.

Then, from 1586 to 1587 artist named Paulus Kuhnbut made a protective layer of iron without gilded pieces, to protect the fountain from destroying it.
Then came the major restoration of the Beautiful Fountain that was during the time from 1821 to the finished, three years later, in 1824. It cost 200.000 guilders and the whole pyramid was removed, from which parts that were in good shape were included in the restoration.
For safekeeping, some of the original parts were in the museum, waiting for the new reconstruction to officially come into its old place. But at that time, reconstruction used paint instead of gold and silver, and most of the parts were gray colored.

Then it came to the last reconstruction which was from 1858 to 1930.
The pieces that are left in the museum were painted like they were originally looked. Instead of gray, there was gold on the figurines and surrounding gate, made to keep the fountain safe from touching and again ruin this masterpiece.
For this repairment was made by Mayor Dr. Ritter von Schuh, and all that was removed to be restored was waiting in the ‘Germanic National Museum ‘ All of these restored figures were once great figures in Germany, some of them from Europe, but the most od all were from Rome in Italy, representing the most influential people of those time.

Bit by bit this fountain became one of the landmarks of the city of Nuremberg. It started from two or three lions with water spraying and being able to have the water for everyone. And all that in the center of Nuremberg.
From those lions, it became 19 meters pyramid with all the important figures at that time. From priests to wealthy merchants in the lower layers of the fountain to the top where the Pope was ruling at the time of repairing the fountain.

The Myth Of The Ring That Grants Wishes

The story goes that the gate that keeps the fountain has the ‘Brass Ring’ hidden among the other that forms a chain has a little different look, and if you touch it and turn it around, three times, that all of your wishes will come true. At first, it was for the couples that couldn’t have children, so they were there a lot, and most wishes were connected to the wealth and health of those in your family.
The old master Kuhn who made the gate had a daughter, and she fell in love with someone who wasn’t rich, and after he heard that she want only him, after finishing they moved to another town.
But, as he promised, he left one ring on the gate loose, so one can turn it around. The fact is that the gate has 2 rings, one made of golden brass, and the other is made of dark iron, one on the North and the other on the Southwest and both of them can be turned around.
So, to this day stayed as the myth, where even today tourists are trying to find even one of those two rings, and now making wishes for everything that bothers them.

The Real Story Of The Ring

In 1587 Friedrich Beer wrote a poem about the rings on the Beautiful Fountain and the truth about the rings is that Master Kuhn left his ‘trademark’ on the fountain by leaving those two rings loose. From then on, when everyone finds out that, they rather believe that fountain grants wishes.
But the wishes mostly stayed the same, when you turn the ring three times, you will be blessed with children, and most of the wishes are for love, for a good relationship, for marrying loved ones, and for having children.

Inside of this closed fountain, because people always wanted to touch the figurines on the fountain, and the colors were peeled almost every year, the council of the city of Nuremberg made a strong fence adding to it a new story and stopped ruining the great works of art 19 meters tall.
Figurines from the top-down go like this: on the top are Moses, with seven prophets along with him. In the middle are 16 f the most influential, popular, and cruel people that were popular in the Middle Ages.

So, if you ever get to Nuremberg odds are that you will pass through the main square, and have the same right to find and try to turn the ring three times and make a wish. If not passing by, then make your own tour, and you will be amazed by what has left from centuries ago. 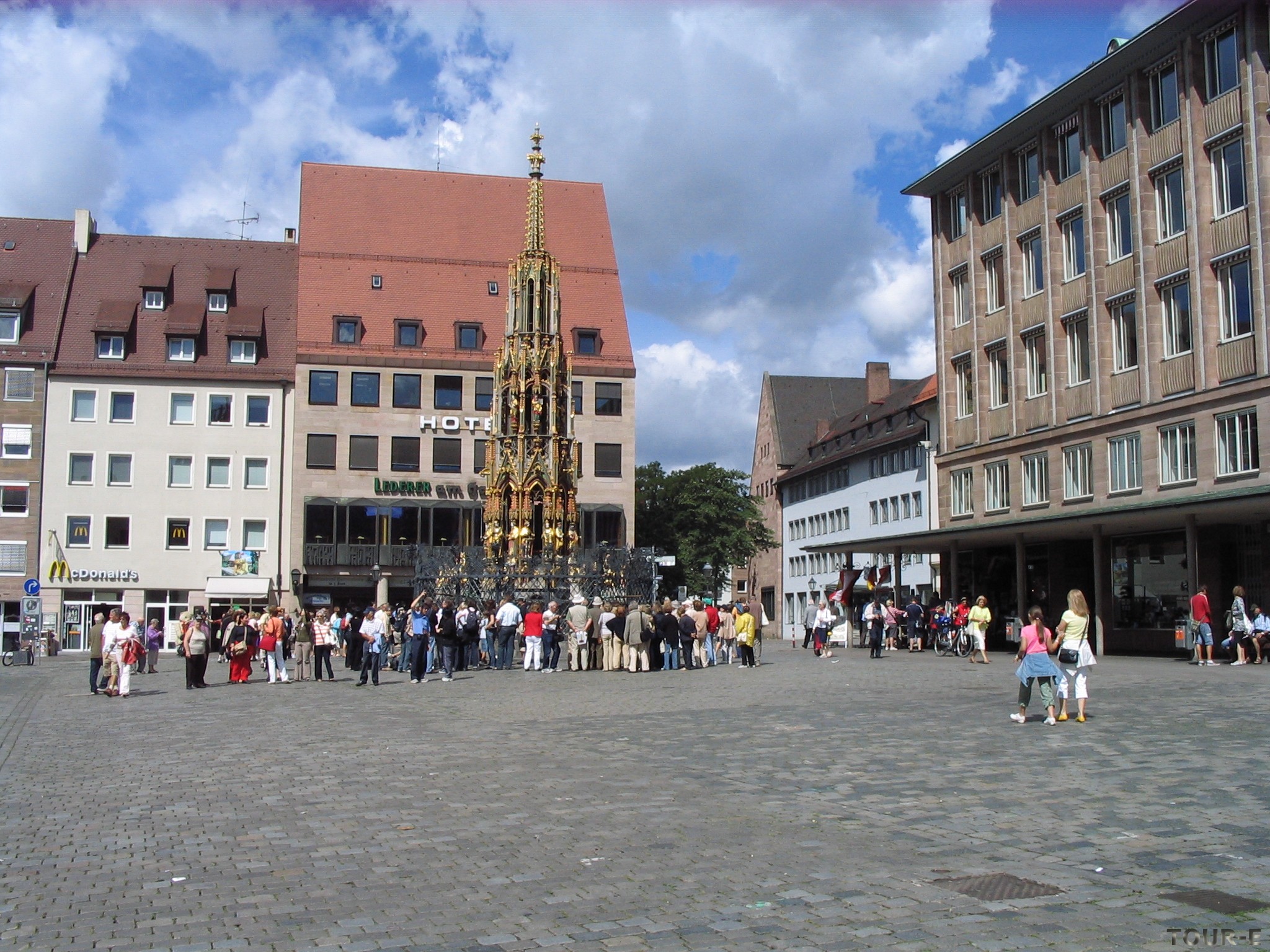 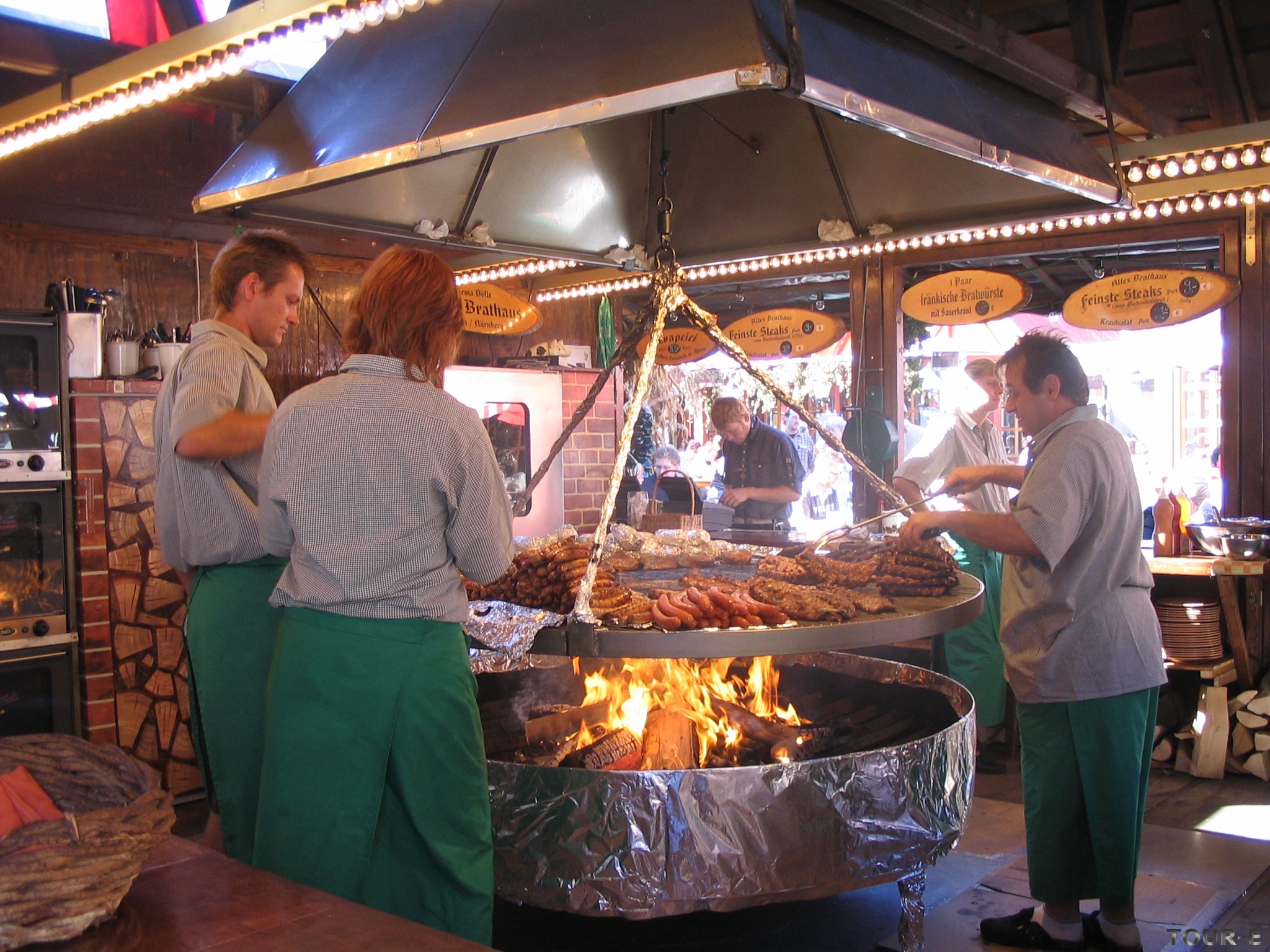 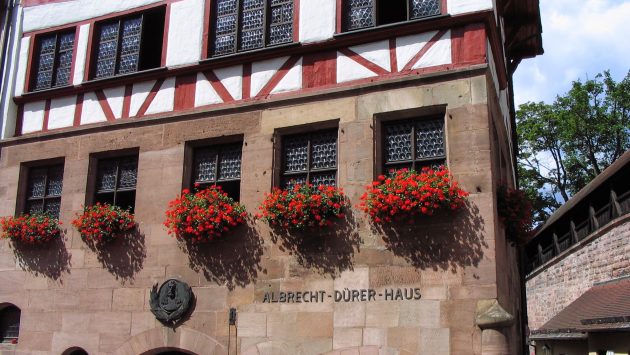